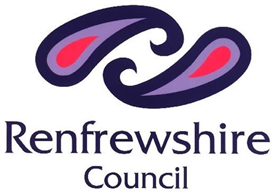 From Boden Boo and Erskine Beach on the banks of the Clyde to Gleniffer Braes Country Park with views over to Ben Lomond, Renfrewshire is a place of contrasts.

It is full of history; with Paisley Abbey, its famous textiles heritage, Paisley shawls and more recently with its industrial history with engineering. Renfrew is the ancient county town but today the council headquarters are at Paisley, Scotland’s largest town.

It is home to the Glasgow International Airport, the largest in Scotland and the Braehead shopping and entertainment complex as well as being close to the Glasgow City centre with good motorway and train links.

Paisley was bidding for the title of UK City of Culture in 2021 as part of plans to use culture and heritage to help regenerate the town; the town lost, but the impressive work done during the bid has showcased just how much Renfrewshire has to offer and what a great place it is to live.

And many people agree; in the last year property prices have risen by 7.9 per cent with an average price of just over £119,000.

The driving force behind the bid, and determined to keep on fighting, was Renfrewshire County Council. The Royal National Mod, Scotland’s celebration of its Gaelic culture, will take place in Paisley in 2022.

The council has featured steadily in the Convention of Scottish Local Authorities annual awards, recently for its ‘Behind the Noise’ pioneering music and business education course which combines expressive arts, health and wellbeing, literacy, numeracy, social studies and technologies.

Street Stuff is Renfrewshire’s COSLA-award winning youth programme which provides a range of activities and support for young people across its most deprived communities, working with St Mirren FC, Police Scotland and Scottish Fire and Rescue.

If Renfrewshire and its council sound like the kind of places where you would like to live and work, keep up-to-date with the jobs on offer here at HIJOBS.

Advert Based at Renfrewshire House, Cotton Street, Paisley. You will provide effective support within the Management Accounting team within Finance Services, taking a leading role in respect of financial management and accounting services, the main

Advert Based at Mile End Centre, 30 Seedhill Road, Paisley. Based within the Mile End Centre in Paisley, you will manage and lead the multi-disciplinary teams providing Care at Home services and be responsible for

Advert Based at Renfrewshire House, Cotton Street, Paisley. The Fundraising team for Paisley Museum Reimagined is looking for an energetic team player to provide administrative support to the Campaign Director, Fundraising Manager and Board of

Advert This post is internal and open to Renfrewshire Council employees only. Based at Clark Street Depot, 9 Clark Street, Paisley. The Service wishes to appoint a dynamic and enthusiastic person who will assist in

Advert Based at Mary Russell School, Hawkhead Road, Paisley. Renfrewshire Council is looking to recruit an enthusiastic and skilled Early Learning and Childcare Officer. The main duties of the post are: to contribute to the

Advert Castlehead High School, as a successful and inclusive school, ensures that the support provided for learners is of the highest quality and the work of the Pupil Support Team is key to this. This

Advert Renfrewshire Council’s Early Learning and Childcare Centres strive to provide a nurturing, safe, and stimulating environment which engages and motivates children in their learning through play. We aim to encourage all children to do

Advert This post is internal and open to current Renfrewshire employees only. Based at Falcon Day Centre, Falcon Crescent, Paisley. You will assist with the management and development of the Day Centre by operating as

Advert Based at Renfrewshire House, Cotton Street Paisley An exciting opportunity has arisen for an experienced policy professional to join the Strategic Planning and Policy Development function within the Council’s Policy and Commissioning Service. The

Advert Cultural Venues requires talented catering staff to join our team and assist in the delivery of catering services across our Town Halls and Art Centre. The post will be predominantly based between Johnstone Town

Advert This is an opportunity to join one of our professionally challenging and rewarding child care teams. You will have personal qualities, professional skills and knowledge which will be applied and tested in all aspects

Advert Based at Renfrew Health and Social Work Centre, 10 Ferry Road . This post is based within a team which is recognised by HMIE and SWIA as delivering high quality services and very effective

Living Wage Renfrewshire Council supports payment of the Living Wage of £9.07 per hour as the minimum level of remuneration to its employees . Therefore, successful applicants will be paid the ‘Living Wage’ - (the

Advert Based at Riverbrae School, 2 Middleton Road, Linwood, Paisley. We are looking for a highly motivated person who is committed to working with young people/pupils with Additional Support Needs. Support staff are deployed to

Advert Based at Park Mains High School, Barhill Road, Erskine. Working as a whole school technician you will assist the teaching staff in the work necessary in practical areas of the science department as well

Living Wage Renfrewshire Council is a Living Wage Accredited employer and supports payment of the Living Wage of £9.07 per hour as the minimum level of remuneration to its employees Therefore, successful applicants will be

Living Wage Renfrewshire Council is a Living Wage Accredited employer and supports payment of the Living Wage of £9.07 per hour as the minimum level of remuneration to its employees Therefore, successful applicants will be

Living Wage Renfrewshire Council supports payment of the Living Wage of £9.07 per hour as the minimum level of remuneration to its employees . Therefore, successful applicants will be paid the ‘Living Wage’ - (the

Advert We are looking for a highly motivated person who is committed to working with young people/pupils with Additional Support Needs. Support staff are deployed to support young people within schools and other establishments across

Advert   This post is internal and only open to Renfrewshire Council employees.   Based at Abbey House, 8 Seedhill Road, Paisley.    You will work alongside Social Workers, para professionals and Care at Home teams, undertaking assessment,

Advert Based at Renfrewshire House, Cotton Street, Paisley This two-year temporary post offers an exciting opportunity to join the End User Support Team within ICT Services. The team is responsible for remote and mobile desktop